As I write this I am 24 hours removed from my second acquaintance with the Great Britain 3 Peaks Challenge. Unlike last time when I finished with a feeling of exhaustion-laden achievement, today I look back with disappointment and regret. 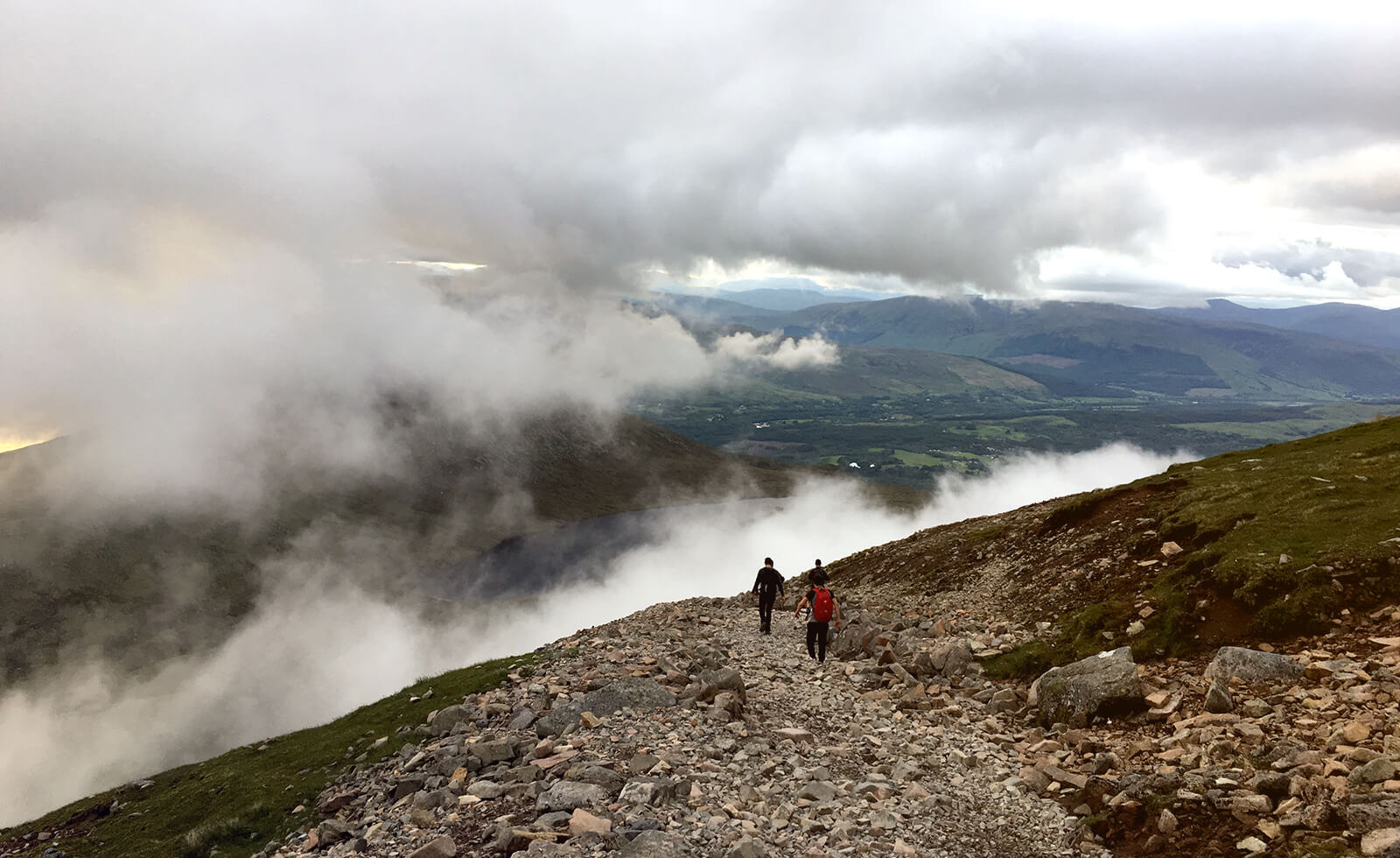 At this point there’s probably cause for a bit of backstory to understand how I arrived at this personal denouement, so let me set the scene. We had already completed mountain number 1, Ben Nevis in northern Scotland, and what a pleasure it was. Warm air filled the silent, Scottish outback as the evening sunlight delicately kissed the edges of the wild panorama. The descent was a sight to behold, the green and gold mountainside at its finest. The climb lasted about 4 hours and we were soon on our way south for the second leg of our journey… and it couldn’t have been more different.

Scafell Pike’s climate was of the wetter variety, it was 4:30am and the clear blue skies had been replaced with a full coating of heavy, turbulent rain clouds. The hibernating sun gave way to an inexorable downpour, but regardless we started the climb.

The climb was straightforward but rather miserable given the worsening conditions. As summit fever kicked in the winds that rattled through piles of rocks increased in hostility as the horizontal rain spattered my face and bare legs unabatingly. All 6 of us by this point were completely soaked, and from a personal perspective I was becoming increasingly cold - the rain had long since penetrated my thin, not-so impermeable jacket and I was shivering like a leaf on the last day of autumn. My longstanding concerns about my ‘wet clothes’ not being waterproof enough were realised under the mountain’s harshest jurisdiction.

“All 6 of us by this point were completely soaked, and from a personal perspective I was becoming increasingly cold”

Shortly after reaching the top of England’s highest mountain and posing for a quick photo, owing to my eagerness to get out of the cold I started to lead the team down the mountain. I pursued what I thought was the only trail of cairns away from the summit as if they were breadcrumbs in a forest.

As we descended, following cairn after cairn, I was experiencing a growing frustration that the other guys weren’t in as much of a rush to get down as I was. I thought “am I the only one desperate to get out of here?”. In my trembling, sleep-deprived state I was constantly turning around expecting everyone to be hot on my heels but in actuality they were rightly taking their time negotiating the slippery and treacherous aspects of the downward route. The welfare of my teammates should have been as much of a concern to me as my own, but I let my anger at the situation rule my head.

About 15 minutes into the decent we were faced with the realisation that we had taken the wrong path when we discovered a rescue point (a random white box) that was not passed on the way up. I had somehow led us down a completely different path.

“I had somehow led us down a completely different path.”

We deliberated briefly, one possibility that we go back up and start again, another that we search for the nearest recognisable landmark, but hastened by the desire to exit the adverse weather as quickly as possible we opted to continue down the wrong path. The hope was that we’d ultimately end up rejoining the previous route at some point. Well that did not happen, and little did we know that we were about to embark upon a long journey of hapless trudging through what can only be described as no-man’s land.

A relatively short period of time had passed when we reached something that somewhat resembled ground level as we recklessly tumbled down the wrong side of the mountain. It was mostly a course of steep, grassy verges and we adopted a network of gushing mountain tributaries as our guide down the slippery slopes. This eventually led to a stunning waterfall that brought us mercifully to the foot of the mountain, out of the extreme weather, but in the middle of nowhere. We were now totally lost.

“I found my frustration with the situation was also accompanied by a worsening resentment towards the practice of mountain climbing.”

Food sources were running low and fatigue was setting in for several of the lads. To top it off we had no way of communicating with the outside world due to the lack of phone signal. Our one saving grace was that team leader Nick’s phone was able to just about register our GPS location allowing us to plan a vague route back towards our van. This ended up being a significant development without which could have landed the team in a more serious situation. 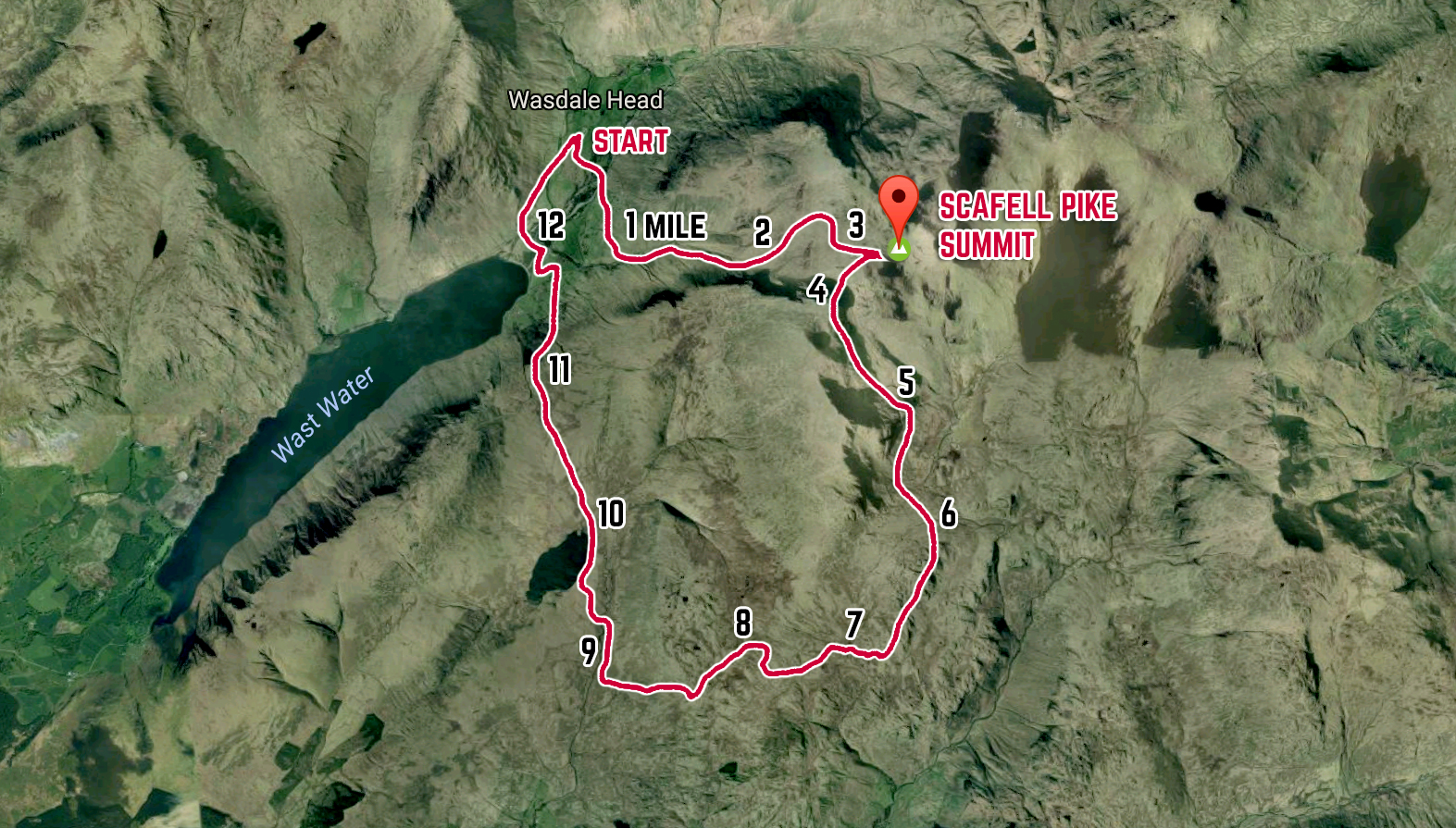 We finally found our way back to the van after traipsing through 9 miles of valleys, plains, foothills, marshes and rivers in the non-stop rain. I found my frustration with the situation was also accompanied by a worsening resentment towards the practice of mountain climbing. I was pissed off, just like the others probably were, and from that point I had lost my desire to finish the challenge.

“I’ve always persevered through adversity, but this time I let myself down…”

The challenge itself was technically dead in the water (pun intended) as we had no chance of making up what ended up being 5 hours of lost time, and all my clothes were soaked to the point of no rescue. I stuffed my sodden clothes & shoes into carrier bags and tied them up with no intention of reopening them until I got home. On top of this I was feeling worn out from the amount of shivering my body had devoted to fighting the cold that had settled in my bones. I decided to quit the 3 peaks challenge.

Arriving at the point of quitting any physical challenge is not something I’ve ever done before, I’ve always persevered through adversity, but this time I let myself down.

Several hours later upon arriving at Mt Snowdon I could have resurrected my wet clothes and coped with the cold fabric for one last push (important lesson - try to bring spare shoes) - this didn’t stop the other guys who simply geared back up and got on with it. Yes, I have already got a successful “3 Peaks Challenge” under my belt so it didn’t mean as much to me as some of the others, and I know that from a physical standpoint I wouldn’t have had any problems with another ascent, despite the extra-curricular events on Scafell Pike. My legs were tired but far from written-off.

In spite of all this however I sat in the van because I simply didn’t want to climb the last mountain. I let my emotions get in the way of my targets and my principles and for that I feel so so disappointed. I also want to apologise for not seeing it through with the rest of the guys, some of whom could have done with my co-operation and experience during the final trek. I send my congratulations to the others on completing the challenge, regardless of the timeframe it’s still a huge achievement (perhaps a bigger one due to the detour!).

Later this year I face my second full marathon, a 13-mile Tough Mudder and my first 100-mile cycle event, which I now know will have very different outcomes. There will be no quitting, there will be no regrets. The important lesson I’ve learned this week is that you get out of these challenges what you put into them and for me this will always be remembered as my failure.